My role on RTU is gradually trending towards considering the the very small, for which I make no protest. It is not so much that the relativistic universe does not fascinate me or that cosmological inflation doesn’t push my buttons; but my plans for the future take a specific path towards the quantum end of the spectrum meaning much of my additional reading is focused in this area.

My last post simple harmonic motion, was the first in a new technical series – posts which will appear infrequently but contain the mathematical rigour required to get behind the details of a particular subject. As promised, we now return today to a more discursive post to consider one of the big ticket quantum effects – quantum entanglement. Towards the end of the post, as we cover Bell’s theorem the reader will be required to think through some basic probability – this can be done by a beginner with no mathematical background.

You may recall from previous posts that describing a quantum particle’s state is characterised by the wave  function- a partial differential equation describing the wave-like properties of a quantum particle (we keep saying quantum particle to indicate that such complexities are not required when considering a classical particle). Imagine the wave function as a  machine, the type where you put things in and get something else out. A classic machine.

Into this machine we can throw different information (for example the degrees of freedom within a quantum system), then (ignoring the inner workings) out of the machine comes a crisp mathematical expression offering a complete probabilistic description of the particles options. Everything a particle may do, expressed in a probabilistic expression. We have been considering all the information we need to feed the machine about a particle to arrive at this description of its universe, but what happens if some of the information we need is in fact the information about another particle? There you have it, after less than 300 words we have quantum entanglement.

Let’s enrich our understanding with an example. Quantum particles posses a quality known as spin. It isn’t quite the same as the dictionary definition of the word – that is the Physicists favourite game, to alter the meaning of words – but in this instance it isn’t too far away either. For those who are interested, quantum spin is a form of angular momentum carried by particles; which for the really astute is what omega represents in a classical system in my post on simple harmonic motion. For the purposes of our illustration let the spin take one of two values; up or down (these expressions used in particle physics). The spin can be one of these two values here, the choice is binary. A photon; the quantum of light, is indeed a particle which may possess one of these two spin values. If you take a laser, and aim it correctly at a certain type of crystal you can create pairs of photons which become entangled – that is to say the qualities one possess has a direct consequence on the other. It is observed that if we measure the spin one of the photons as up, the other will certainly be down.

There is more to the above – intuitively it might seem as though it makes sense, if two photons are fired off near to each other that they have some sort of influence on each other but the effects of quantum entanglement  are not interested in how close they are to one another. The same phenomena will be measured even when the particles are separated by great distances; this is what elevates quantum mechanics to being spooky action at a distance.

There are a couple of things worth illuminating at this point. Firstly, we are not suggesting that the particles are sending messages to each other, while we may not be able to fully explain how quantum entanglement works we are reasonably sure there are no secret messages. Secondly, whilst we are saying that the particles will have opposite spin we are not saying we can accurately predict the spin of both of them; we can just say A if we already know B. Finally, whilst we may strive to understand to understand how nature works it is unwise, particularly at the present, to attempt to understand why nature works in that way. Indeed a question of why nature does something may in itself have no meaning, but let us climb out of the philosophical rabbit hole and progress.

Is it actually real?

In order to progress in the field of Physics we need to abandon common sense – whilst it can take you so far it is riddled with human bias. Although this is a most excellent practice, it is prudent to ensure that as you abandon common sense you seek evidence wherever possible to confirm the nonsense.

In this spirit, I offer you an overview of Bell’s inequality, which is the single most compelling piece of evidence supporting quantum entanglement. It also gives a more rounded understanding of what we are dealing with. Locality is the idea that an event in one location cannot instantaneously cause some effect in another location, without having something travel from A to B (for example light or sound). This is common sense – if a gun is fired in Australia, a person won’t instantly die in London (at least not because of the Australian gunshot). Einstien tried to show the world that quantum mechanics must be flawed since it breaks locality, which is clearly at odds with the universe. Bell killed locality, and showed the universe was at odds with us. 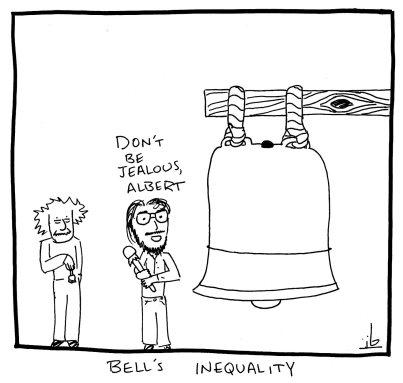 To begin, assume locality is true. Mathematicians often do this – it is called proof by contradiction where we assume the contra is true and then reduce it to absurdity. We say that locality is true – i.e. quantum entanglement as we described it cannot exist because the very heart of it is causing an effect instantly somewhere else. The most common way to test anything in particle physics is with detectors; there are all sorts of different detectors (a photomultiplier being a personal favourite), but truly for comprehension just let the detector be a device which measures information about a particle. We want to do an experiment where we measure information about locality – so I can assume you will be comfortable in the assertion that it is useless to have only one detector. We need two detectors, which we will place in locations such that we can take measurements at exactly the same time and there is no chance one particle will influence the other. Under our assumption that locality is preserved, I should see no dependence in the results from the two detectors.

In the experiment electrons are used – they are fairly easy to come by and manipulate in laboratory settings. In order to get things going, we place both the detectors with the same set up, separated by a good distance and fire electrons at them and observe the result – in this case we get the same reading on both detectors (don’t worry about what the reading actually is, it only distracts from comprehension of the key points). From this we conclude that they must be coming out of the source the same – we can fire millions and millions of electrons and the result is always the same and agreement between the two detectors so locality lives on.

Now we tinker with our experiment a little and move the set up around. Our detectors can only give the value 1 or 0; there is no choice in-between. As we mess around with the detectors we can gather the following information;

Now with last point, if we were to randomly set up our detector each time, and repeat the experiment again and again and again how many times would you expect both detectors to have the same result? That is a 1 on both or a 0 on both? You need to think this through, it’s not that intuitive I am afraid.

In this experiment the orientation of the detectors, as in the set up that gives the reading of 1 or 0 is totally random and changing. We don’t actually know what the instructions are being sent from the the source, so we can’t say it will be 5/9. But what we do know by bullet point 1 is that the electrons being fired have the same instructions. The instruction and the set up might always deliver the same result, as per bullet point 2 or, or we might get the set up we have just described where we said 5/9 should be in agreement. Actually it does not matter because what we can construct is a lower bound on the probability – this is what Bell’s inequality actually is –

Probability of agreement between detectors > 5/9

What we have done up to now is outline an experiment and make some very broad brush assumptions. The reason we have had seemingly confusing random arrangements of detectors with 0s and 1s is so that we don’t get lost in a long discussion about the different states of quantum particles and how or why we get certain readings. When you are trying to understand something, it makes no sense to layer on top another 4 or 5 things – let the brain digest a layer at a time. It also means I have something else to talk to you about in future weeks! So to this point we have devised an experiment with totally bullet proof logic which says the absolute minimum number of times we will see agreement between the two detectors is 5/9 – so 5 out of 9. Of course doing this experiment 9 times may well yield the incorrect result; probability can only make certainly and laws when it is done enough times to make it totally implausible that we are seeing a chance anomaly. If I did my experiment 9 billion times, and saw something that was not close to 5 billion in terms of the agreement between the detector we would know something is wrong.

The result of the experiment when performed, however, is that the probability is less than 5/9 – it is actually around 1/2 and you can do it as many times as you like. Our theory has failed us! Many different laboratories have done the experiment, the machinery has been tinkered with and the electrons have been fired again and again. Millions and millions of times and the only conclusion is that the upper bound on probability is broken. There are two candidates here – either we have made an assumption which has turned out to be wrong, or the preservation of locality is wrong. I appreciate my detector set up looked arbitrary, but you will either have to trust me that these arguments correspond to an acceptable simplification of real world phenomena (or indeed read into the detail). Many have tried and there has never been any suitable candidate to suggest something is wrong with the assumptions. To cut to the chase, some of the brightest minds in the world have been hoping to come up with something easier to understand to explain the phenomena and have not managed. Locality cannot, and is not preserved in the quantum world.

The result embodies the weird world of particle physics; not only are we impacting the properties of electrons by measuring it the electrons are impacting each other without even being in the same place. What can our little human minds even trust? I love it.

Next time I will be doing a brief run through of the quantum numbers, which I hope will be interesting in its own right and serve as a useful reference article to have on the site.