Symmetry is very simple when spoken of with regard to the geometric idea of placing a mirror-line on a shape and observing the same image, but as with most things when you involve Physics things get a little more tricky. It is not so much that the concept becomes so different, it is just that we must be a little more creative in our approach expanding the definition of a symmetry. Any serious modern theoretical physics needs a deep understanding of particle physics, which makes symmetries unavoidable. Being an integral part of the quantum world and relying heavily on group theory, I find myself naturally drawn to this area when in truth I should be completing my mathematical methods.

Particle symmetries need not be taxing – I the majority of this in Hamburg’s Hotel Meridian after many pints of good quality German pilsner at 1am, which I hope serves as testament to this. Symmetry has been studied and admired for centuries – from Galilean invariance to Newton’s laws of motion, yet its importance in describing the universe on the most fundamental scales remained elusive until reasonably modern times. Whilst I have introduced symmetry as a central pillar of modern particle physics, which it is, what it was actually Einstein and his appreciation for the very large that elevated symmetry to the new level. You can run from group theory, but you cannot hide.

In order to progress above the notions of symmetry taught in first schools, the example of the shape and the mirror needs to be considered as a very small subset of a much grander set of symmetries. I must be fair here – Physicists are strangely creative, and like to use every day words and change the meaning. A symmetry in Physics is similar to a symmetry in reference to a shape; but clearly it is not the same. Some dictionary definitions are broader – I have noted the following definition:

The fundamental laws of nature tell us that if a cannonball is fired in one place on Earth, the same result can be produced in another location on Earth providing the initial conditions are the same. Providing you have the means to control the initial conditions, this is very easy to verify. Based on the above definition, is that a symmetry? Of course it is; the two experiments are different things entirely and yet they have an exact correspondence between the results. So when we say we have a symmetry, in very crude language we are saying we can do something to something and leave something else unchanged. For all the other elegant definitions, this is the one I use. If you have a thirst for rigor we are talking about transnational in-variance. 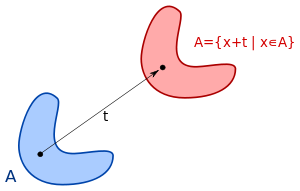 Another possible example with our cannonball is time. If I fired my cannonball at 3pm or 4pm, using exactly the same initial conditions would there be any difference in the outcome? The answer is indeed no – however we have changed something, which is the time of the experiment and yet the results are exactly the same. We here have another symmetry to add to our toolkit – a symmetry in time. When you start to think of symmetries like this you can of many different situations that would be easy to describe as symmetrical – rotating a square through a 90 degree turn still looks exactly the same. We have a rotational symmetry.

So why did I mention Einstein? Well the early seeds of relativity came when it was realized that the laws of Physics look exactly the same when moving at a constant velocity in a straight line as they do to the person standing still. It is impossible to determine by way of experiment if you are moving in a straight line at a constant velocity or if you are moving; this symmetry had been observed and known for quite some time yet the importance in this underlying symmetry of nature was not pursued and appreciated until Einstein. The very underlying consequence of this theory is the dilation of time, which gives us so much difficulty defining the present; although let’s leave that to the expert.

Particle physics allows even more symmetries than classical mechanics does, and it is the symmetries shown by particles that facilitates many of the quantum oddities we talk about so often. When we consider particles we consider them existing in Hilbert space (which is an extension of Euclidian space to allow us to do the calculations we need to: see here). The quantum mechanics of a particular state is described as a wave in Hilbert space; where we start with a similar notion to classical symmetry; taking |Ψ〉 as an allowed state of a particle we transform it to a new state R|Ψ〉(R here is a linear operator giving a symmetry transformation). However quantum mechanics also allows for a new superimposed state |Ψ〉 + R|Ψ〉; there is no good analogy I can give for superposition in classical physics.

This superposition means that we end up with a group of different allowable states, which by summing across all states gives one rotationally invariant representation of the group. The core idea of symmetry has not changed, as we have moved from classical to quantum – but comprehension becomes increasingly difficult owing to the lack of examples readily experienced by the human mind. This is why mathematics is such a powerful tool – it let’s us visualize where our senses cannot; but it does make full “understanding” of quantum mechanics inaccessible without advanced mathematics. The quantum fun does not end there; there are new types of symmetry we can define which were previously excluded from us in the big world. Much of quantum mechanics involves the exchange of particles and there is symmetry to be had here clearly if we observe the exchange of identical particles and nothing happens. This symmetry allows the classification of the fundamental particles; bosons have an invariant wave function under interchange of identical particles yet fermions change sign. The quantum behavior of these particles is different giving symmetry to one and fundamentally changing the way in which they interact.

Now don’t be fooled into thinking symmetry breaking does not occur in classical Physics – spontaneous symmetry breaking is all about symmetric laws of Physics in an asymmetric system which is very much like the orbit of the rock on which you sit. Today however we do focus on particles (something we should really do every day). Much like an object will flow towards the point of lowest gravitational potential energy, the particle will move to it’s lowest energy configuration – ground state. Ground states are a superposition of all allowed classical states which if you think about what this means, it roughly says the particle is everywhere at once. It should be fairly easy to classify this as symmetric under translation – given it can’t really be anything other than everything it is allowed to be! This is true for systems which have finite degrees of freedom (a degree of freedom is a parameter governing what the particle may be).

Now if we take the second case in which the degrees of freedom are infinite we allow a second possibility – a possibility that the ground state is not symmetric. Where we have asymmetric ground states of systems which obey symmetric laws we have spontaneous symmetry breaking – which gives us for example magnetism. Here rotational invariance is broken which is what gives certain materials their magnetic properties. The breaking of symmetries is a huge topic in modern theoretical physics; we still look for new symmetries of nature under the hope that they are somehow broken and hence hidden from us.

Back to the Higgs

The point of this post on symmetry was to add a little more color around the Higgs mechanism. Before we do, let us first introduce gauge symmetries. Everything we have been speaking of is a global symmetry; when we have bee talking about translating a system from A to B we are taking everything with it. If I perform an experiment one meter from a wall, then move my experiment one meter towards the wall , is it transitionally invariant? The answer is yes – you move the room with it. This is global symmetry. Gauge symmetry gets really odd and goes back to the idea of degrees of freedom. If I were to label 8 different locations as the only locations you can be, you could consider these your degrees of freedom. I don’t know exactly which location you will be in, but I can make various predictions using statistics and other known conditions. If it is 3am, I might consider it probable you are in bed – but I cannot say with certainly, perhaps you drank too much water before bed and are in the bathroom. Now suppose something happens and I know you will no longer use two of these locations – I can describe your entire world using 6 locations even though I have 8. I have two “extra” locations. Gauge symmetries rely on redundant degrees of freedom.

If the extra degrees of freedom are truly extra, I should be able to mess around with them in any way I like and not impact the underlying symmetry of the system. Take the room example – if I set fire to the two locations you could not use anyway, you would still reside in 6. My act of arson wouldn’t change a thing. When these gauge symmetries are broken via spontaneous symmetry breaking we give rise to massive modes – to the Higgs observed in the standard model. In fact it is spontaneous symmetry breaking that is responsible for other fundamental interactions – for example the weak interaction mediated by W and Z bosons. It is  just the additional spontaneous gauge symmetry breaking of the Higgs mechanism that gives these bosons (and other particles) mass – without this their symmetry breaking alone predicts them to be massless.

Closing remark: You may well conclude reading this article any think you still don’t really know what symmetry breaking is all about. This would be a fair comment – we have produced no mathematics and not a single piece of group theory. Anyone who is seriously interested in obtaining a full understanding would do well to study Group Theory first (recommended text) before a book aimed at symmetries (this book is good – but be warned it could of done with a good proof read!).

15 responses to “When nothing seems to change”