On 14 March 2013, CERN announced the discovery of a particle with the qualities theorized by Peter Higgs (above) in the 1960s. The discovery of the Higgs boson was arguably the most significant experimental result in the history of particle physics, confirming why certain particles have mass and others do not. The hunt for the Higgs was one of the longest and most expensive scientific experiments ever conducted, which the majority would agree was worth every single Earth coin spent. Today we examine why the Higgs boson is so important to particle physicists, as well as clarifying an area of much confusion; the distinction between a Higgs field and a Higgs boson and the role they play in the universe at what we believe to be the most fundamental level.

This will serve as a brief introduction to the Higgs, with the intention of producing some follow-up posts around specific areas I feel have been done an injustice. I am trying to keep posts a little shorter, particularly when conceptually challenging to aid digestion.

Motivation for the Higgs

It is hardly ground-breaking news that objects possess a quality known as mass since we are so accustomed to its effects. Yet as with many things in this universe, when you give it some extra thought it does start to seem rather curious. Weight is a force which varies according to two things; the strength of gravity and the mass of the object – so what actually is this second quality? It isn’t sufficient to say something has mass because it is made of “stuff”, since as we delve down into the most fundamental levels (e.g. the level of the standard model) that definition would break. If we accept that when we drill down deeper into the structure of matter we eventually reach a fundamental building blocks of the universe this cannot be made up of anything, otherwise it would not be fundamental. There must be a mechanism whereby these fundamental particles obtain this mysterious quality known as mass – then we can say an object has mass because it is made of fundamental particles.

The standard model is one of the most successful pieces of Physics to emerge from the twentieth century, which let’s not forget included Einstein’s relativity. In the same way that the periodic table summarises the known elements and tries to group them in such a way as to illuminate their related properties, the standard model does the same. In the below diagram we have the quarks, in which vertical rows interact with each other (so up interacts with down), the leptons which are split into the charged leptons (electron, tau and muon) and associated neutrinos and the force carrying bosons – the photon being the most familiar as the quanta for electromagnetic radiation. Then over in the corner we have the elusive Higgs boson. 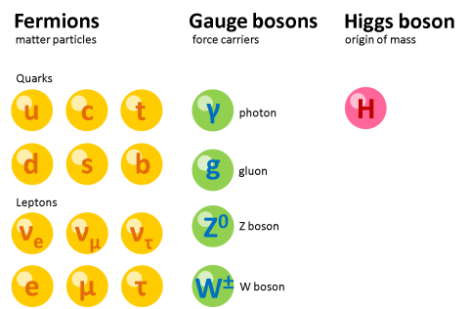 When you consider the problem you can understand why Physicists needed to solve it; it is a little embarrassing to be teaching mass to high-school children without any explanation of its origin. To be able to boldly state F=ma, but actually have no idea why the m is even a thing in the first place. As noted the problem was theoretically resolved in the 1960s and experimentally verified a few years ago; so we really are only beginning to understand the most basic properties of existence – this truly is a remarkable time to be alive.

To understand the Higgs boson you have to first understand the associated Higgs field. A field is an important and conceptually difficult idea to understand in modern Physics, but generally speaking a field assigns a value to each point in space. This may be, for example just a value known as a scalar field, or it may be a number and a direction known as vector field. A magnetic field assigns a value and direction to every point in space in such a way that any particle which magnetically interacts will experience a force. Whilst it sounds like a field is simply a mathematical construction to allow the human mind to rationalise, remember these things do definitely exist. It is quite possible to demonstrate a field in action and predict the outcome – be it magnetic, electrical, gravitational or otherwise. Jump and see. Mekhi’s most recent post offers more depth in regard to fields, which I would recommend being comfortable with before continuing.

The Higgs field is an energy field which it is believed permeates the entire universe, (although proving this is a little difficult, but it seems consistent with our experiences). It is very easy to appreciate that an electric charge will influence the behavior of an electron which has an electric charge, yet a neutron can pass through the field and feel nothing since it possesses no electric charge. Well it is similar for the Higgs field – a particle can experience the Higgs field a large amount, experience it a little or not at all. The field can be thought of like a permanent resistance or drag, often likened to moving through a molasses like substance. Try to picture this – you are in the gym with a personal trainer, and they get you to perform a fun exercise where they attach an elastic band around your waist and get you to run while they resist your motion. If they provide a little resistance, you would feel a little more massive, or if they provided a lot of resistance you would feel much more massive – yet your  actual bodily stricture is unchanged. It is the varying resistance to you moving forwards which gives the phenomena of a varying mass. This is the idea of a Higgs field, but do try to drop the requirement for motion in a line as in the previous example.

When we look at it this way, mass isn’t really so special. It is not something which “stuff” is naturally endowed with, or any magical property of the universe – it is simply the wonderful interaction of particles and fields. The massless particles, a photon for example, are only massless because they do not interact with the field – this is the difference between a massless particle and a massive particle. Personally I find it strange and exciting to think of it like this, but it really reconciles some of the perceived differences in the fundamental particles of the universe. There is one final quirk about the Higgs field which it is worth illuminating before we move forwards – the Higgs field is non-zero centered at low energies, as shown in the bellow diagram, fondly referred to as a Mexican hat.

The Higgs fields may only take a zero value in the centre if it has enough energy to “overcome” the hump. When we reach a low energy state, this is not the case and so the value of the field must be nonzero centrered, just like it is pictured above. You have a seemingly contradictory situation, where in order to come as close as possible to “nothing” – to reduce the Higgs field down to zero you need to add energy, which as we know is synonymous with mass. Particle physics is truly a wonderful playground. The mechanism behind this is a central pillar of modern particle physics, which for those who are interested is called spontaneous symmetry breaking. This is one area which I feel warrants a post in its own right in the future; but could only be done a disservice tagged on the end of a section.

So Peter Higgs creates the Higgs field as described above – and actually on a high level it makes a whole lot of sense. So why the hell does everyone talk about a boson and why was the Nobel prize given in 2013 for work from the 1960s? The Higgs boson is simply a fundamental particle that obeys the equations laid down by Higgs which is the carrier of this quality we label mass. The field, as described above works theoretically but it isn’t really possible to test in its own right – even though it predicts mass to exist in the way it does it isn’t theoretically possible to observe. So, to put it simply if you spank the field with enough energy you create a particle, the Higgs boson much like smacking the surface of water and watching a droplet leap up. The electromagnetic equivalent the photon, which is an excitation of an electromagnetic field. This might sound strange, but in the quantum world we are quite used to this. If you have 100GeV you can get any particle with this mass energy burst into existence. The best way to prove that the Higgs field is the correct description of mass in the universe is to produce the Higgs boson as predicted by the model. This is exactly what CERN has been busy doing.

There were however some serious obstacles. A Higgs boson is not massless – it interacts with the field itself and the model does not predict a value for the Higgs boson but rather a range of values. Secondly, the Higgs is highly unstable – unstable particles don’t hang around they decay into other more stable particles. Particle physicists can only detect these decay products, which creates another problem. Say your decay product is two down quarks – this could have come from a Higgs but it could have come from many other different decays too. The Higgs decay is actually very rare, so how do you know which you have? The predicted difference between the observed collisions with the Higgs existence and without is so slight that to be able to have confidence in its existence you need millions (and millions and millions) of data points. This is exactly what CERN have been busy giving us – smashing relentlessly around the clock. We are now at a point where this subtle difference has been predicted beyond reasonable doubt. It is accepted that mass is caused through interactions with the Higgs field, carried by the Higgs boson.

This is the most expensive particle in the standard model, but if it takes us further on the journey to a Grand Unified Theory it represents excellent value for money.

37 responses to “Physics is massive”