I was asked a question about electron orbitals via an email the other day – which basically asked do electrons orbit the atom or not? It is an interesting question but if you only have a few seconds the answer is no.

The orbiting electron is the Niels Bohr model, which is fine and works to help elementary physicists understand the electron but if you are going to break into the realms of quantum mechanics then I am afraid you need an all new picture – you need to adopt the Schrodinger model which I show you below. 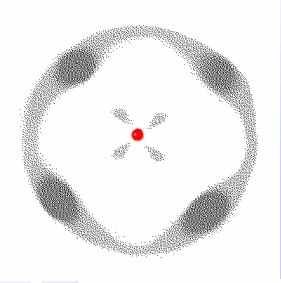 This is where the phrase “quantum fuzz” comes from from and embodies some of the important points of quantum mechanics. Most fundamental is the fact that I cannot tell you where an electron will be next given a set of initial conditions, and even more disturbingly – I cannot measure the position and the velocity of the electron to a good level of precision (this is Heisenberg’s uncertainty principle). So what I am left with is a set of probabilities of where I will find the electron which is what you are seeing above – the denser areas being the more probable but none the less there are a huge range of possible locations for the electron – and if an electron can go somewhere it will, some places just take longer than others to reach.

This set of probabilities is what we were alluding to when we were talking about electron shells. It is the mathematics and physics behind this which explains why electrons are arranged in “shells”, why there are a certain number of different quantum states within a given energy level and why the orbitals have the shape they do. So perhaps by calling them orbitals, we are falling on our own sword?

11 responses to “The non-orbital electron”