So my friends the time has come. We have worked through some fascinating physics, we have considered the political implications of certain decisions on science. We have looked at some surprisingly interesting chemistry and even strayed into the realm of philosophy at certain times which has been of great interest. In fact the more I study physics the more I do appreciate the need for an understanding of philosophy and chemliteracy. But now we find ourself at the point we knew we would get to – the beast lurking in the shadows, the elephant in the room, sciences awkward little secret: biology.

My current course requires me to have a fairly shallow understanding of Biology – don’t get me wrong I have to study about 100 pages, but even so it is enough to leave a taste in the mouth. Now I am coming to the end of the biology I thought I would start by giving my reflection on the subject as I have studied it, and then talk about something I actually did find of reasonable interest, which is the endosymbiotic theory.

So the conclusion is I am afraid I do not like biology. It just isn’t right with me. For a start, I have found myself so desperate for mathematics I have been googling “tough differential equations” to get my kicks before bed (yes, this is my porn). I appreciate that biological research and modelling does require fairly advanced mathematics, but the study of it really does not. Oh the words the words the endless words. It is just definition after definition followed by more definitions – I have developed a new found respect however for those who can keep all of this in their brain, it is a monstrous task to try to keep all of this information right where you need it. But this is not my biggest gripe.

The big issue? Rules – or lack thereof. I am a physicist – the reason of my hydrocarbon chains traversing over planet Earth is to develop a richer and deeper understanding of the laws that govern us. To describe the universe in the simplest laws possible – to seek, to understand – to rationalise. You are indeed on rationalising the universe. Do you get laws in biology? Yes. Are they proper laws? No. For example a certain type of organism is unicellular. Oh well except for that one multicellular type -that one isn’t. Plants, oh right yeah they are autotrophic. Well in general anyway, the ones that eat flies are not. How in the name of science are you supposed to make sense of all of this! I come from a world where absolute rules are something which we search for endlessly. When we find exceptions, for example Newton’s laws of gravitation differing for certain observations we realise the rule isn’t correct and we define a new understanding, which holds until we find a new inconsistency. This approach really went against the grain.

Having had a colossal moan over why I am a physicist and not a biologist, I make reparations with biologists. It is fascinating in many senses and it is indeed a very important study to the human struggle for a better life. I always appreciated that there were different types of cell, as summarised by this table. 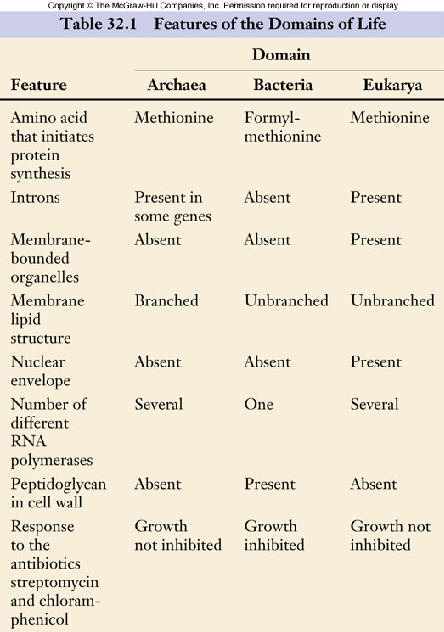 The domain of Eukarya is the most commonly known one – that contains the most familiar cell types of the animal, the fungus and the plant (plus others) with bacteria (or commonly called “true bacteria” being a distinct domain. Archaea are in many ways similar to bacteria – as can be seen by the similarities in the table, however there are some more subtle differences. The most important distinction between the cells is the fact that in the domain of Eukarya  the genetic information is stored in a membrane bound nucleus, whereas in the other domains the genetic information is unbound.

The quest of evolution is trace the species back to the ancestor – to label down in a top down approach so that we know exactly how all of the different species came to be. Well in the 1960s the same question was posed by Lynn Margulis. Have a look at this cell, this is a “typical” plant cell – the cells are specialised depending on where they occur on the organism.

Now take a look at this bacteria cell, again considered to be a “typical” cell. 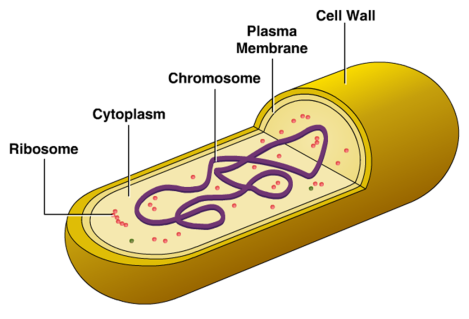 These cells are fundamentally different, but our experience of evolution tells us everything comes back to a common ancestor. This is the theory that is put forwards in the endosymbiotic theory – that every single different cell can be traced back to one common ancestor – the seeds of life. What ended up happening in the beginning is different cells from the common ancestor were all different types of prokaryotic cells, which developed different specialisms. Eventually what happened is cells ended up engulfing these specialised prokaryotic cells, in a mutually beneficial living arrangement – eventually these foreign bodies within the cells became an integral part of the cells, what we now call organelles.

Whilst there isn’t yet a totally definitive way of saying if this is totally true, it is consistent with the observed patterns in biology in the modern experience. This is of course a fairly simplified view – and the overall theory is much more advanced; there are specific organelles that developed to become the mitochondria, whilst others developed to become the chloroplasts in plants; and so on giving the variety of cells we have today. This is totally consistent with the fact that whilst there are great differences between all of the cells within the biosphere – there is a deep and underlying unity within them that cannot be ignored. Where there is an underlying theme or a pattern, there must (surely) be a richer underlying simplicity – and this we believe is it. I think this picture, entitled the tree of life sums this up very nicely.