Today, we go on a journey that can only be made in the mind. We attempt to form an appreciation that the features of the Earth cannot (and should not) be viewed as a set of discrete processes, but rather as an interlinked web of dynamic biological and geographical processes. To begin, we journey to the highest point one might call Earth, the edge of the atmosphere and journey through to the core. From there we take a second to consider the ever-changing crust of the planet and what the future may hold, before considering the birth and death of the place we call home.

From the atmosphere downwards

We are poised at the top of the atmosphere, looking down on planet Earth. We are at the edge of the stratosphere where the shroud of nitrogen, oxygen, argon, water vapour and carbon dioxide fades out into the vast expanse of space. We are 50km above Earth. Above us is the Mesosphere and beyond that the Thermosphere. These layers bear no significant bearing to our story, but the diligent reader may wish to explore them further – they are of great significance to some important Earth processes such as the disintegration of meteors.  There is relatively less mixing in this part of the atmosphere – although it is still of importance in the warming effect of the Earth. The shroud of gas hangs over planet Earth, supported in a wonderful balance. The force of gravity drags the atmosphere down to the surface and the force of the gas pushing outwards provides the balance – one of the many important balances in life as we know it. Here is our view of home.

As we journey to 10km above Earth we are at the end of the stratosphere and at the troposphere. There is nothing structurally different about this layer – but it is of greater importance in the warming of the Earth. There is also considerably more mixing in this layer, as the convection currents from the Earth are at their strongest. It is in this layer where the majority of the absorption and re-emission of infrared radiation takes place, a process which is so important  for keeping the planet warm. There is greater depth on this matter in this post.

It is worth noting that the climate we deem to be so significant to life as we know it is balanced by a number of factors:

Of great importance in the above is clearly the atmousphere, which without our planet would be minus a few hundred degrees. Clearly the warming effects which we so often associate with negativity are vital for sustaining life on Earth. It is worth mentioning here some of the processes that go into this fine balance of temperature with reference to the troposphere because this is where the processes that happen on Earth are at a fine balance.

Carbon dioxide absorbs infrared radiation as the carbon-oxygen bonds have the ability to vibrate at increased energy levels and subsequently re-emit. But the carbon in the atmousphere is in a fine balance of its own. As I have told you before, carbon permiates through all life stored in carbonate rocks, emitted through volcanic eruptions, absorbed and emitted by living things, dissolved and degassed in the ocean and deposited and buried. All of these places are resovioirs where carbon are storred – which of course are contributed to by anthopogenic sources but I don’t want to get into this now. The point is this – everything is in a rough balance. When you put more carbon in, it has to go somewhere – in my studies they used the analogy of a tank of water with a leak in the bottom. When you put more water into the tank the flow out the bottom increases. In a simplified way, this is the same. When you increase an element of the carbon cycle you alter the composition of the carbon cycle and thus you alter the temperature of Earth. But hold on.

There is the water cycle too – in much the same manner if one were able to increase an element of the watercycle, say for example by increased evaporation then there would be a greater water vapour content in the air which would in turn increase the global mean surface temperature (GMST). Note here that water is a greenhouse gas, but absorbs infrared radiation by, in simple terms, an increased rotational motion. The questioning amoung you may have thought what could cause the increased evaporation? This is where our water cycle, our carbon cycle, our stratosphere and our troposphere all unify into one.

This is one example of positive feedback. There is an increase in the amount of carbon in the atmousphere – let us say for arguments sake it is by some random event. A super massive volcanic plume, humans, it does not matter. What now happens is our troposphere has increased greenhouse gas – which then absorbs more infrared radiation from both the sun and the surface, recycling energy, increasing the GMST. Now what? Well the temperature is hotter so that means many things. For starters the rate of evaporation and the maximum humidity of the troposphere has increased which will retain more water vapour within the troposphere. This is a greenhouse gas – so further the GMST increases. There are other effects too. The amount of ice will decrease which increases the GMST, since ice reflect a huge amount of the suns energy back into space. But then the increased water vapour will also increase the cloud cover. On the one hand the increased cloud cover may reduce the amount of energy which hits the surface however on the other hand it absorbs and reemits radiation downwards. How to make sense of it all? Take a second and look at this bear.

So far we have travelled through the stratosphere and the troposphere and seen the various feedbacks that come into play, effecting the composition and the temperatures at the surface. Now we better hurry on our journey – we are already behind schedule.

What is this surface we keep taking about? It is the crust of the Earth. I will warn you now our journey through the Earth will be a little brief. If we want to pause for greater lengths it will need to wait for another day. On our whistle stop tour of the Earth we observe the following as we go downwards:

The ever changing crust

The above is of great interest to us – it tells us what is where but if you want to know why the plates are moving around the Earth and explain some of the key features we see upon it then you need to look to another discontinuity. The mantle can be split into two layers:

Speaking of divergent plate boundaries this is broadly associated with two oceanic plates, and the typical feature of this is a mid ocean ridge. These are fascinating things – as the two plates move away from eachother there is upwelling of  balsitic magma from below. This causes a forcing apart of the sea floor, known as sea floor spreading along with feartures know as pillow lavas at the ridge. The sea floor being forced open and spreating drives the plate tectonics – with the plate being lifted at one side, known as ridge slide. When the magma reaches the water it discharges its minerals in plumes called black smokers. 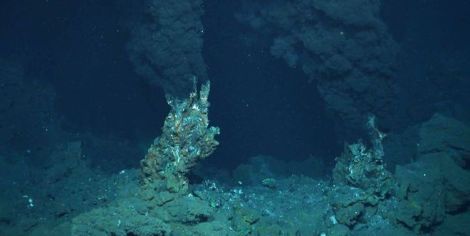 Then we have convergent plate boundaries. Because this is less dense, if both plates are contintal crust this is easy, and what happens is that they buckle up together forming a very obvious feature – a mountain. However if one of the plates is the more dense oceanic crust (or indeed two oceanic plates) we see subduction – the plate being forced down under. One of the key features of this is an ocean trench, but we also see arcs of volcanoes occour about 200km from the subducted plate boundaries – like this. 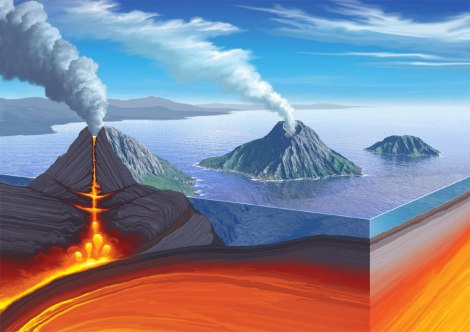 Quite commonly you end up having oceanic crust trapped, as the ocean gets smaller and smaller due to plates moving, then two pieces of contnental crust that used to be apart now meet. The end result here are some interesting features. Clearly you have a mountain range since the continental crust will not subduct. But some of the crust that was once on the ocean floor becomes trapped and is pushed upwards forming mountains made from oceanic and continetal rocks. It is in this way that the Himilayas were formed. I have drawn a diagram of this process in my notes. 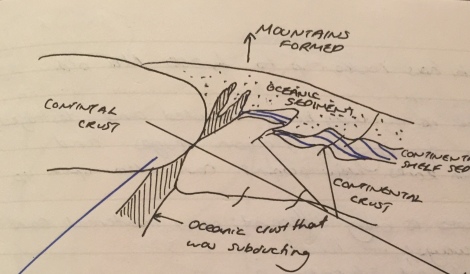 And finally we have a transform fault – these are easy where the plates motion is parallel and you get a “slip” in the land. The processes described above are all how earthquakes occour. Seismic energy building up and then slipping, releasing the energy. The San Andreas fault is one of the most notable transform faults.

The birth and death of our world

We will not discuss in any way the big bang here, the subject is too deep and this post is getting longer and longer! What we will start from though is the birth of the planet. We have rotating discs of hydrogen and helium, with rockyer grains in the inner part of the disc (look out for my post on the galaxy next). The grains clump together forming heavier and heavier elements, smashing together like a snowball collecting snow. Eventually everything has been emalgumated or swept away and you are left with a very large, dynamic blue dot. It is hard to think of everything we know and love on the Earth once just being a swirl of particles and dust but that really is all that it was. Now after all of that, everything that we know and use has come together into this planet.

Of course the Earth cannot be forever – infact it cannot even be close to forever. The issue we have is that the sun is around 50% of the way through its life; that is 50% of the way through the hydrogen used in nuclear fussion. When this is used up there can be no more and the mass of the Earth will be squashed down into nothing again. From nothing to everything and back again. I have said it before and I will say it again, if intelligient life as we know it is to persevere we need to start working on this problem.

8 responses to “The tale of the dynamic blue dot.”