Having completed a tour of our planet, in which we explored the wonders of the interconnected processes that occur here on Earth, it seems natural to venture out further to the galactic scale. Not that from this point forwards we will follow convention, and denote the Galaxy we currently reside in with a capital G; rather than galaxy which refers to any of the galaxies in the universe.

Shall we briefly tour the solar system before we move out a little further? The solar system is the system of objects orbiting the sun, in which we find ourselves. Before we take a tour of the planet, it makes sense to briefly define one. The definition of a planet is a bit of a scientific hot potato, but the current common sense definition of one is a celestial body that;

As a result of this, you may have heard the debate around Pluto which has recently been deemed a dwarf planet. The solar system has been displayed below: 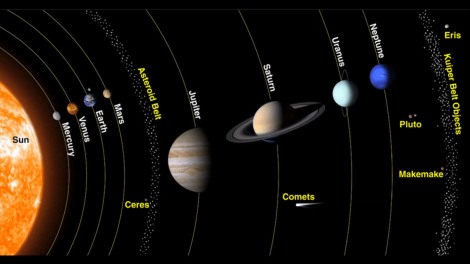 I thought it might be fun to to go through the planets, and list some of the weird and wonderful features:

Jupiter is a massive planet with a swirling appearance, which is the result of several layers of cloud. The uppermost layer is crystallized ammonia which has been coloured by traces of other substances. Atmospheric winds creates the distinctive cloud patterns. There is no great distinction between atmosphere and interior (except right at the centre), but the materials get hotter and denser until there is a hot ocean of hydrogen and helium with no solid surface. The Great Red Spot of Jupiter is a storm the size of the Earth which has been raging for hundreds of years.

Aside from the planets above there are the dwarf planets (Pluto, Eris etc) as well as comets and many many asteroids that orbit the sun. There are around 1,000,00o asteroids bugger than 100m and many many more smaller than this. You may have noticed when you read the above that there are very very few similarities between our planets and the others in the solar system and you would not be wrong. There are some important differences which allow us to experience life as we know it;

While all of this may seem very exciting – and it is, it is important to step back and realise the insignificance of Earth. Whilst the solar system seems like everything, your day to day experience should tell you it is not. When you look up into the sky at night the experience you see above you is known as the Milky way. In fact our solar system is just one of many systems of bodies orbiting around a common star. There are millions and millions of stars, with clusters of a few hundred stars being common. All of the matter within the Galaxy orbits around a common centre, what we believe to be a supermassive blackhole. This black hole keeps everything orbiting around a common centre. In fact, our Galaxy is arranged in a disc shape known as a galactic disk, with a large halo shrouding it. Inside this galactic disc there are stars, planets and interstellar matter. Without going into too much detail, have a look at this image:

You can see the bulge in the middle, and the overall shroud of the halo. Within the halo there is little more than globular clusters of stars. In fact the galactic disc on a scale model is a bit like two CDs on top of each other. Now if we were to zoom out and look at our galaxy what we would see is this: 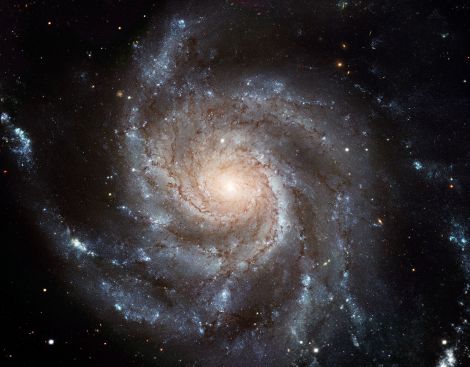 Our galaxy is a spiral galaxy. The arms of the galaxy are illuminated as clouds of gas are sucked into them, being condensed slightly, and forming new stars. In the formation of these stars, the dust and interstellar matter glow brightly giving the arms illumination. This can be seen here: 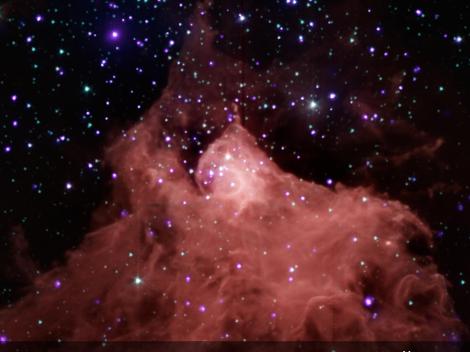 Important measurements in the 1920s showed that in actuality there are many other galaxies and they lie beyond our own – i.e. the universe is a collection of galaxies rather than just our own. Quasars are superbright lights in the universe, the result of accretion discs around black holes at the centre of galaxies where temperatures reach a million Kelvin. These can be used to map the galaxies in the universe. When we do this we see the universe begins to smooth out on the largest of scales. The following maps have been provided by the wonderful Atlas of the Universe.

This map shows the observable galaxies at a scale of 1bn light years:

And this one shows the largest scale we have, 14bn light years.

We cannot see any more. Why? Because the light has not yet reached us. But do not fear, it is most certainly on its way.

I know that this has been very very brief in places I wanted to keep this around 1000 words and I did not even manage that. If you want more details on any of these items please leave a comment and I will either answer there or write another post.

23 responses to “A galactic adventure”

Follow Rationalising The Universe on WordPress.com
Join 8,686 other followers