Black holes have been a source of fascination for physicists and science generalists for years. There is no way to actually observe what happens in a black hole, due to the fact that light cannot escape the pull of a black hole; we can theorise as much as we like but we cannot actually know. Some people like to theorise about exotic universes that lie on the other side; and as sci-fi as it sounds – we can’t even rule this theory out. There are so many exciting, surprising and unknown qualities to black holes that this would be a very long post indeed if we were to exhaust all features worth exhausting. For the purposes of this post, consider a black hole to be made of three things: 1) a horizon, 2) empty space and 3) a singularity. These are;

The purpose of this post is to focus on one of the surprising qualities, the fact that black holes glow; very faintly and very cold but it has a temperature. This is a departure from the perception that most people (I assume?!) had, that they are just black and cold. The relationship with gravity is such that the greater the gravity at the horizon the lower the temperature. See how I said up there empty space was complicated? Here is why. It is the empty space which gives the black hole its glow. Now that really is exciting.

It all comes down to the creation and destruction of particles. This is something that occurs in empty space all of the time – which is what is represented in the Feynam diagram below, which shows the annihilation of an electron postiron pair. Don’t get too hung up on which particle pairs we are talking about; the below is just part of an illustration. What happens when particles collide, particle creation, annihilation, stable particles and alike are all part of the rich and fruitful pursuit of particle physics. 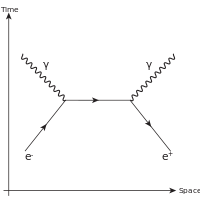 So what is happening is that lots of particle pairs are being created and destroyed in empty space; great. Well sometimes this happens right by the black hole horizon and rather than the subsequent annihilation one of the particles manages to escape while the other particle is pulled towards the black hole. The end result is that energy is being taken away from the black hole – and as everyone knows heat isn’t anything other than energy. This is what gives black holes their non-zero glow. Basically, the horizon causes some of the quantum fluctuations to be converted into thermal energy.

The only final thing to add is that the temperatures we are talking about are very very (very) low. Black holes millions of times the mass of the sun would only exhibit temperatures to the order of billionths of a single Kelvin – and bearing in mind 1 Kelivin is a degree above absolute zero, -273 degrees centigrade it’s hardly toasty. This has direct application to string theory, where D-branes, basically just very small black holes exhibit thermal vibrations allowing the theory to hold.

29 responses to “Warmth in the darkest of places”