A snappy little post today, the science behind the spectacular display of the Aurora Borealis a.k.a Northern Lights. This mystical display of colours may be better left to childhood imagination but in the name of science we shall explain its true origin. As with many things here on Earth, the existence of the Northern Lights is thanks to the Sun. The Sun may be million of miles away but the effects of this colossal heat giant can be easily felt on our planet.

Storms on the Sun blow out streams of electrically charged solar particles across space and the Earth is in the path of this stream. The solar wind, as its called, distorts the Earth’s magnetic field and allows charged particles from the Sun to enter the Earth’s atmosphere. This is most easily done at the poles of the Earth where the magnetic field lines originate or end, this is why we predominantly see the lights at these polar locations where charged particles are more easily trapped. 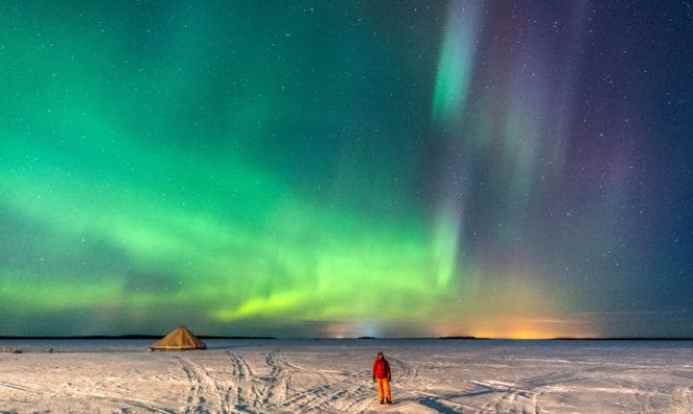 The charged particles then collide with atoms in the Earth’s atmosphere and these atoms undergo a process called excitation. What does it mean for all these little atoms to get excited? Let’s recap the structure of an atom:

Atoms consist of a nucleus in the center where the protons and neutrons are stored and then a cloud of orbiting electrons. The orbiting electrons can live in various shells or ‘energy levels’ (which are usually given a number n, n=1 the first energy level) for a full description of this see the much more detailed post ‘Electron Configuration Demystification‘. When the charged particles from the solar winds collide with the atoms in the earth’s atmosphere the energy transferred in the collision causes the electrons in the atom to move up to higher energy levels. Also called – excitation. However, the electrons cannot stay in this state and eventually fall back down to their original energy level. When they fall down their relinquish the energy they took from the energetic particles in the solar wind and this is given off in the form of photos. Photons remember are particles of light. This is the light we see in the Aurora Borealis, but wait what about the magnificent colours?

Different gases/molecules in the Earth’s atmospheres give off different colours when they are excited. Oxygen gives of the colour red at the highest altitudes when excited atomic oxygen emits a photon in the 630nm wavelength range of visible light. At lower altitudes, emission from excited oxygen occurs at 557nm wavelengths which causes intense green colours to dominate, the most common colour of the aurora. At even lower altitudes atomic oxygen is uncommon and atomic nitrogen takes over, emitting in the blue wavelengths of the spectrum. Finally, colours such as yellow and pink are a mixture of the primary reds, blues and greens.

Often the Northern Lights, as so called, can only be seen in the North, but if a particularly violent storm happens the strength of the solar wind can be so strong that it can penetrate the Earth’s atmospheres at lower latitudes. So if you’ve managed to see the Northern Lights in England it’s very likely to be tied to recent extreme solar conditions.

As disappointing as it might be that the magnetic field of the Earth blocks out the spectacle of the Northern Lights across the majority of the globe, it really is our silent defender. Were we to have a constant stream of charged particles bombarding our planet’s atmosphere, not only may we not have an atmosphere in the first place but we would suffer the constant changing of chemical compositions of matter and the wreaking of havoc with our electronic infrastructure. So it seems the Aurora Borealis remains, as is the case with most things beautiful, rare. What a tick off the bucket list it would be to go and see their spectacular show in the polar regions of this wonderful planet.

20 responses to “A Spectacular Show”