I am doing a reasonable amount of reading in inflationary cosmology at the moment, thanks to a talk I went to with a German Dr of Cosmology last week – so thought that I would write something in this area. One of the catalysts for the recent(ish) interest in inflationary universe theories was the very old flatness problem. The reason I say ish, is because this is an area that has been pondered by the giants of cosmology for many decades – but really the acceptance of the theory as mainstream is a little more recent.

There always have been a number of issues with the traditional big bang theory, however the ability of the model to describe the world around us often led to these little issues being ignored. One of the biggest senses of unease with the model is the fact that the conditions needed to create a universe with the mass density we have are so finely tuned the idea that this just happened by chance seems a violation of the logic which has seen us discover so much. Indeed a flutter away from this magic number of a tiny magnitude brings us to some fairly outstanding results, when magnified over the scales of interest in cosmology.

Now let me begin by noting that the universe is expanding – hopefully this is something you are familiar with. In fact we can be a little more rigorous and say the universe is homogeneously expanding. What does that look like? 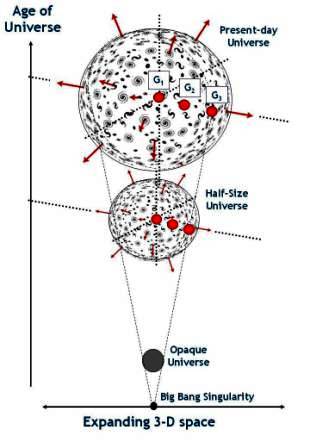 Just pay attention in the above diagram to the sphere – what you can see is that the sphere has increased in volume in the same proportions. Now conceptually the important thing to realise is that the sphere isn’t expanding into anything – what is actually happening is that space and time itself is expanding. The sharp minded might ask if that means they are too expanding – if the spacetime they occupy is expanding – and in short, no because you are held together by forces (some of us weaker than others!). So when we say that the universe is expanding, what we mean is if we were to pick two points in spacetime, for example two galaxies, then the distance between these two galaxies is increasing because the spacetime itself is increasing. If thinking about this kind of stuff does not bring you great joy, we should not drink together. Considering the universe, staring into space and wondering why and how is the most human endeavour there is – something which I guarantee your ancient ancestors did.

Okay great so we have an expanding universe but what on Earth is flatness and why is it a problem. To address this we need to define three types of universe – and they really are quite simple. The first is called an open universe, the second is called a closed universe and the final is called a flat universe. In the open universe model the universe expands for ever and ever and eventually the galaxies become so dispersed from each other and all the lights go out and the universe becomes cold. The closed universe however is a different model. In this model, like throwing a ball in the air the acceleration decreases and decreases until it stops and then contracts back in on itself due to the gravitational lure of the matter within. The final type? Well it is fairly obvious I hope – the flat universe is the middle ground. In this model we have the expansion decreasing asymptotically to zero – hence effectively the universe stops expanding.

Now the rate at which inflation increases depends upon the mass density within it. Clearly  the density of mass also has a profound impact on the strength of the gravitational force – so really it is the matter distribution which is the crux of the critical value – the value at which we live in a flat universe. The value Ω is used to denote the actual mass density divided by the critical mass density – so clearly a value of 1 here corresponds to a flat universe. Efforts to calculate Ω for our universe have put it anywhere from 0.2 up to 2 (and I have read other amounts from other sources) – but the value isn’t that important to the problem. The problem is, when you smooth little movements in Ω out over the entire cosmic history (we know we have 13.82bn years right now for starters) the magnitude of any differences give an Ω value very different to our own. Take a look at this graph, from Alan Guth –

If you are finding this article interesting I recommend you read Guth’s legendary book here. I am currently reading it and it is thrilling – Guth is the father of many inflationary theories and has a wonderful lecture series from MIT Openware available on YouTube. Guth answers the flatness problem, along with many other holes in the Big Bang theory.

Anyhow we digress – the point is this – in order to achieve a value of Ω that is even remotely close to any of the estimated values we have today the universe must have been very close to the flatness critical value – why? Dicke was the first person to point this out – the fact that if we can have any Ω, which we can – it should really only be in mathematical construction we have one so close to 1 – it is just too improbable. The values of Ω one second after the big bang in that graph can only differ by and order of 10 to the -16! This is an astounding result which led, eventually, scientists to look for a better reason as to why the universe is the way it is. It had to be one that incorporated elements of the big bang, which it does but also allowed for things to be created from effectively nothing and explained the flatness problem. It also needed to overcome the other big issue with the big bang, which is the homogeneous nature of the universe.

This is why inflationary theory was born and to date is the most accurate and compelling pieces of evidence we have for the formation of our universe. If I have not convinced you already – it contains multiverses. Does not get sexier than that.

13 responses to “The flatness problem”