Imagine doing something every single day of your life, something powerful and fundamental to the lives of everyone around you. Something so valuable the world simply could not exist without you. Imagine going through all of that and not having people pat you on the back and say good job buddy. Now pause and give a seconds thought to gravity. Gravity is (in my opinion) the most unappreciated “force” – it is ranked below the unforgettable waste of time staring George Clooney and Sandra Bullock on Google and broadly neglected in school level Physics. What makes it so exciting is that once you move past the question of what? and move towards how?  things very quickly start to get a little bit weird and the answers start to become a little uncomfortable. Here’s to you, gravity.

The traditional, the comfortable

When you first think of, or are taught gravity the first thing that comes into your mind is probably the following, taken from United Academics. 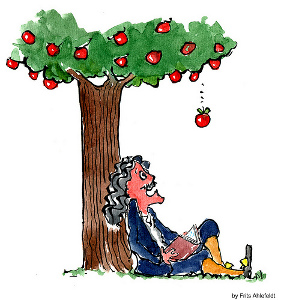 The apple falls from the tree. There is a force attracting things towards the center of the earth. When you first hear this it feels like you have been told a very simple truth – like being told fire is hot or water is wet. But in reality what you are being told is a simple observation. In the very same way that one might observe this blog post – and take the fact that it exists, in this location as a simple truth; it is again a simple observation but how it came into being is much more complex. I have uploaded it to a shared bank of data and you, in a fraction of a second have accessed this stored information, downloaded it and viewed it on a device that allows you to read and understand it. There are deeper levels to this truth of how this blog exists on the internet – truly it is a post in its own right, but this suffices to illustrate the point.

Extending further, we become comfortable that all objects with mass exert gravitational forces – but that gravity is a weak force so the object must me very massive in order for the effects to be anything to get excited over.

We find ourselves with Isaac once more. Principia was published in 1687, and made the following discoveries; now considered every day truths of classical physics:

Einstein: messing with the mind since 1897

Let us start this post backwards – Einstein showed that gravity just isn’t a force. Not a real one anyway. When you stretch an elastic band, and it pulls back on you now that is a force. But in the traditional model, gravity does not make a whole lot of sense.

There is a commonly used example to illustrate how gravity behaves. Take a stretched out sheet of elastic (such as a trampoline). Stick something heavy in the middle, and observe the inward sloping fabric towards the center of the object – steepest where the object touches the fabric. A ball rolling towards this object would accelerate the closer it gets. The following picture is a model of gravity, considered in this way. 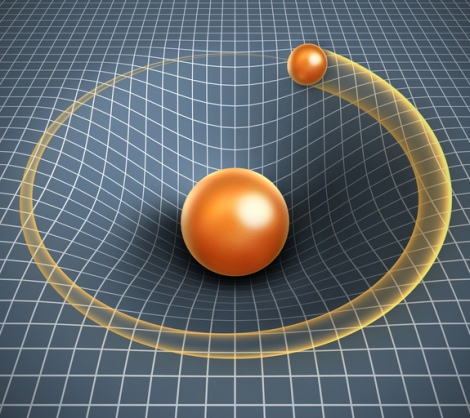 Picture credit to Koya979. In Einsteins new model gravity stops becoming a force and becomes a part of the make-up of the universe. Gravity becomes an impression in space and time. Imagine all of space starting by being full of stuff… something. Then when you put something into that already full space, like a planet, it disrupts this space.

One very important departure from classical mechanics is that in classical mechanics gravity would pull an object from its straight path. In Einsteins world, the body continues to move in the straightest possible path but it travels over curved space-time, which changes its course. I won’t bore with further details, the internet is stuffed with this sort of material – the interested party can make his or her own path.

It just keeps getting weirder

Everything up to now, in my mind makes a whole lot of sense. You can see how Newton got to his conclusions and you can see how Einstein took the ideas further, sharpened our focus on the universe. This is the bit where logic just dissolves.

Quantum gravity depends on probability. It is not a classical theory where one can predict the future given a set of initial conditions. It is truly mind bending. The bottom line is this – for big objects we know our stuff. But the deeper down we search the less and less our ideas make sense. In Quantum mechanics things are down to chance; or at least the current understanding of them can only predict future events with a far from perfect level of certainty.

That is exciting right? Gravitational laws as we know them break down at a quantum level. Right now, inside of you there is a whole world where none of the laws you know and love exist. Can I tell you the answer? If I could I can tell you now this blog would have a lot more followers and I wouldn’t be an accountant. But there are lots of interesting attempts and ideas. Here is an approximate potential for quantum gravity:

The fact is the more you know the more you realise we don’t know. It’s a ripe picking ground with Nobel Prizes aplenty for the individual that can join the dots. It is likely that one of the greatest discoveries of our generation will unite gravity and the quantum world.

This is where I leave you. It’s been a fun little consideration of gravity. Of course this does none of the Mathematical underpinnings of the subject justice. For any discussion or consideration over this – let’s talk in the comments or it’s joseph@rationalisingtheuniverse.org.