In today’s post we’ll be presenting a go-to in every theoretical physicist’s toolkit, the thought experiment. I’ll present its pros and cons while giving a few examples of noteworthy thought experiments across the ages. Thought experiments occur across the sciences and are by no means confined to physics, though the ones I’ve presented below belong to my favourite discipline. So without further ado let’s discover the beauty of what excellent work can be accomplished inside the mind…

What is a thought experiment?

A thought experiment starts, as with all experiments, with the consideration of a certain hypothesis. It then involves setting up a hypothetical scenario in ones head and uses the knowledge one possesses to think through its consequences in order to arrive at the result. Thought experiments are often used in order to ‘perform’ experiments which may not be feasible in everyday life, for example involving black holes or life on fast-travelling spaceships. Thought experiments allow the thinker to transport themselves to strange scenarios and use their knowledge to resolve a problem. Time for an example.

Let’s start with a simple one that doesn’t require any knowledge of complex theories in Physics. (For a comprehensive list of thought experiments see Wikipedia.) Aristotle’s theory of gravity asserted that heavier objects fell faster when dropped. We now know that, in the absence of air resistance, all objects fall at the same speed under gravity regardless of their mass and it is only the air resistance which acts proportionally higher on the lighter objects which disguises the truth – making it seem like a feather falls slower than a bowling ball. It was Galileo we have to thank for our newfound understanding and his ‘Leaning Tower of Pisa’ experiment. Legend has it that Galileo actually went to the top of the leaning tower of pisa to perform this experiment but scientific historians now believe this to just be for poetic effect and the experiment was indeed a thought experiment.

Galileo imagined two stones, one much larger than the other tied together with a piece of string, then dropped from the top of a tower. If it was assumed that heavier objects did fall faster than lighter ones than the heavier stone would be hurtling towards the ground faster than the lighter one and the string between the stones would become taught as the distance between them grew. However, Galileo then thought of the two stones as one combined system, whose overall mass was clearly grater than the larger stone alone and therefore the whole thing should fall even faster than the larger stone alone. The contradiction here pr 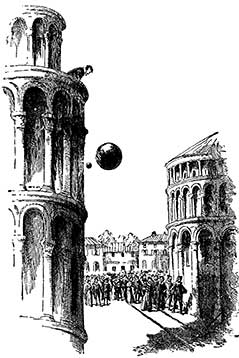 oves that the assumption made by Aristotle must be false and led Galileo on his way to prove his Law of Free Fall – that objects fall at one rate, regardless of their mass.

With this simple example alone you can see the power of the thought experiment. Of course this experiment can quite easily be performed on Earth now-a-days in an artificial vacuum which eradicates air-resistance. However, there are many famous thought-experiments which work in domains much less accessible to humans.

Example #2: Einstein and the elevator

Probably the most famous thought-experiment came from Einstein in his breakthrough to understanding the equivalence principle between acceleration and gravity. Einstein imagined he was in an elevator cabin isolated from the outside world. He dropped an object and saw it, in his minds eye, fall down to the floor. He wondered does this behaviour necessarily mean he is on Earth experiencing the familiar force of gravity keeping his shoes on the floor of the elevator and the pulling the object to the ground when it is dropped? No, not necessarily he realised. This elevator cabin could be in a rocket in deep space away from any gravitational pull of planets and as long as the rocket was accelerating exactly with the magnitude of 9.81 meters per second squared (as is the value of gravity here on earth) all the same effects would be observed. He would feeling a force pushing the soles of his shoes down to the floor and acting on the falling object just as he did on Earth.

The observer in the cabin cannot distinguish between the two scenarios and this made Einstein realise that accelerating frames of reference are the same as those in gravitational fields, leading to his theory of general relativity. Einstein was a master of the thought experiment and he used the same method of pondering in his earlier theory of Special Relativity when he realised that when one sits on a train that is moving at a constant velocity, if the windows are blacked out and the train is perfectly smooth the situation is indistinguishable from the train standing still. The thought experiment is a powerful tool, which helped Einstein in his two major discoveries without having to travel to deep space or annoy train conductors. 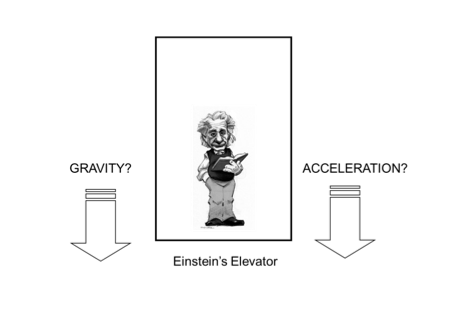 Are thought experiments all sparks of genius or can things get a little befuddled? Let’s see Schrodinger’s take on things. Schrodinger, a quantum physicist was unsettled by the ideas quantum theory was coming up with in the early 20th century. A famous interpretation of certain results in Quantum Mechanics was the Copenhagen interpretation, which was the idea that quantum objects exist in simultaneous different states until an observation occurs. Taking this Schrodinger then presents a scenario which extrapolates on this idea with a cat in a box that is simultaneously dead and live until someone looks in the box – two simultaneous different states. Schodinger intended to present this thought experiment to make a mockery of the theory and show it’s absurdity. Instead the idea became a touchstone for the modern interpretation of quantum physics, advanced by many physicists who regard the ‘alive’ and ‘dead’ cat superposition as quite real.  Clear evidence that the interpretation of the outcome of a thought experiment can be rather subjective.

It seems thought experiments, because they cannot be performed or experimentally verified, can fall foul to the subjectivity of the mind that conjures them up or the minds that think about them. The process of analysing the outcome of the thought experiment must require deep knowledge of the field in which one is working, rigorous understanding of the laws that govern that particular science and the ability to, without previous bias, review one’s logic.

Physical experiment remains pivotal to testing theories and advancing a science and when one can run experimental tests to check results there is no question over the merit of doing this. However when it comes to pushing science to its limits and trying to find answers to those real big questions, thought experiments come into their own. The physical experiments humans can perform stuck on our tiny planet, working with our fixed gravitational field and objects on the same scale as our bodies, are very confined. We may not yet have the ability to physically probe the very tiny or travel close to black holes in reality but our existing knowledge coupled with the curiosity and imagination of the human mind allows us to sit in our armchair with a notebook and simply think.

12 responses to “Inside the mind: Thought experiments”